I realize the post title sounds a bit pornographic, but it's really just two useful mnemonic devices to help me use a resistance band to keep/get fitter during this mostly-in-bed/no-weight-bearing time. See resistance band, coincidentally coordinated with the sheets, below. 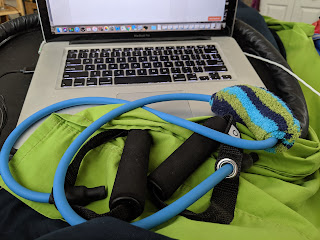 Monday, Wednesday & Friday I do arm exercises that replicate, as well as possible, the ones I usually do with free weights. One of them I'll have to start doing from a seated position, because if I try it in bed, I'll knock over a bunch of things, including liquids. That would be bad. Tuesday, Thursday & Saturday I do leg exercises. Right leg, resistance band. Left leg, the weight of the boot. Also, 2 or 3 times a day, when I've removed the foot from its protective boot (I just LOVE the boot) I'm supposed to do 20 ankle pumps & 20 ankle circles, clockwise & counterclockwise. I do it with both feet, for balance, & to see what unimpaired ankle movement looks like. Grin.

I had Deborah, the home health aide (who came almost every day for the first 2 weeks after surgery & will now be down to 3 times a week, for half as many hours per day) wrap fluffy socks I never use around the bands & sew them in place, since I do this barefoot & a band going across the arch of the foot is NOT comfortable. Much better now. She also did a couple other sewing projects for me. I am not enamored of sewing. Kathy Landfried (now Flummer) & I about died during the sewing portion of home ec. I was always volunteering to rip out other people's seams to avoid working on my own project. I'm a whiz with a seam ripper.

My two-week checkup went great. Got the stitches out & was pronounced a great healer. Took a while to get rebooted, because everyone was involved with an unfortunate screaming child who was getting her stitches out, much less gracefully. Poor kid. The PA eventually came back in & did it himself.

I actually feel very comforted by the boot. I take it off for one period per day, in order to do the ankle exercises, but during that time I feel vulnerable, hatched too soon, anxious to put it back on. Until such time as I am trying to put it on, with is quite a feat, with me being barely able to reach far enough to get the toe velcro strap into its slot. Whew. That's a workout in itself.

I'm slightly less constrained to lying flat on my back with a strict icing schedule, but I'm mostly, with modifications, maintaining that, because the PA said that icing & elevation (icing sounds better than frozen-pea-ing) are still very good things. My modifications: Slightly increase the non-ice time. Slightly decrease the ice time. Let myself sit up a little higher when I'm using the computer, but not when I'm reading, playing poker, watching TV/movies, listening to audio books or inspirational cds.

Anyway, the timer just went off to tell me back to ice, so I shall bid adieu, but not before I tell you I finally got the re-revised version of a little romance story sent off to Woman's World. I'll let you know if they say yay. (They don't actually say nay, just let it wither & die at the end of 6 months...)

Blog alternative:
331. Marry a new habit to an old habit [habit stacking, courtesy of Atomic Habits by James Clear, which is AWESOME] for example, after the day's first icing session, do the resistance band exercises. 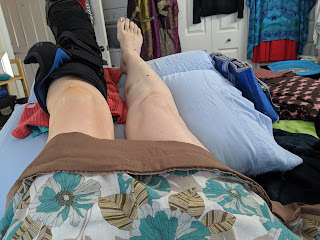 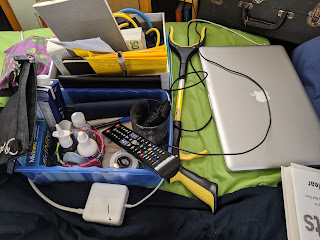