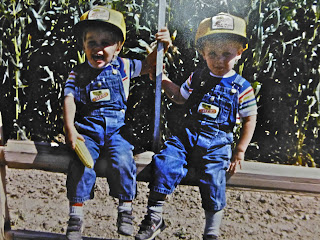 A long time ago there were two little boys who had a cushy job advertising seed corn for their grandfather...

I will admit it: the main purpose of this post is to exceed last year's total. Grin.

My mom is getting a haircut & I am doing the wi-fi thing & then we shall visit my great-uncle Jim & my great-aunt Ellen & then I shall get back to my latest "project." I usually try to do a project or two for my folks--it assuages my guilt for making them sit around & play pitch (I think we've played 55 games so far) when they no doubt have plenty of other things to do. (I predict that they'll die working or playing cards.) I already cleaned out the closet that had the toys in it, setting up the little kid table & putting the toys (neatly categorized) underneath it, leaving the table surface as the perfect suitcase holder. I promptly put my suitcase on it.

Now I'm cleaning drawers that hold coloring books (none of which can be thrown away because they are an awesome historical reference with the colorers' names & ages & dates on the pages) & crayons & markers & things to glue on paper (like lentils & macaroni) & markers that have half a use left & a few that are brimming with color. I'm trying to get all that stuff into one big drawer & 2 little drawers so there will be one big drawer & one little drawer empty for guests (like me) so there doesn't have to be so much stuff just scattered around the bedroom. I also threw out an old clock/lamp that my parents had previously given my paternal grandmother, who died the year before I got pregnant with my 27-yr-old twins. (Which was sad, because she had twins & it would have been fun to share that with her.) The lamp part still worked, but the digital clock had begun to keep some other planet's time. I didn't know a digital clock could do that. We probably threw away a historical oddity that was worth serious bucks. I stuck a floor lamp that wasn't being used beside the bed & put a little nightlight bulb in one of the fixtures so now there's good reading & good getting-up-in-the-middle-of-the-night-to-pee illumination. I'm big on proper illumination.

Better finish this off, because my mom should be coiffed by now.

Blog alternative:
247. Clean out a drawer that has some stuff you don't really need anymore & leave it empty. (Or neatly organize some things that you do need.)

Dear Me, Can't wait to spend some quality time... 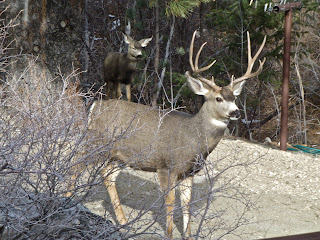 The guy at Carter's Camp just turned the music on. "We don't need no education..."

Christmas was a thing of beauty & laughter & food. What a fantabulous family I have. I do have to say that the highlight was a visit with my son Zach who drove from Minnesota & spent 1 full day in Miles City with the Winter side of the family & 1 day in Nye with the Hjelvik side of the family & then turned around & drove right back to Minnesota. He & I managed a bit of mom & son time when he first arrived & then I shared him with everyone.

I hope your holidays have been splendid to date & that this New Year's Eve ushers in the best year of your life to date. But if it turns out to just have jewel moments sprinkled in randomly, I count that a great success as well.

Blog alternative:
246. Write yourself a letter, wishing you a great year & pointing out some of the great moments of the year that's coming to an end. Congratulate yourself for making it to this point. Make a date for some fun activity--& don't bail on yourself. Show up, with bells on.

Posted by Laurel Winter at 1:03 PM 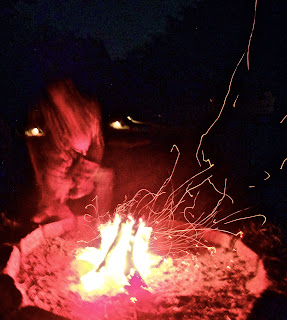 Greetings from Carter's Camp, the local watering hole at Nye, Montana, which has high speed wi fi. Cool that. I've had spotty internet coverage on my travels--& travels I've had. I left Asheville the afternoon of December 11th & stayed with my friend Beth Gwinn in Nashville. Check her out at

The next day I drove to the Horseshoe Casino at Tunica, Mississippi (pretty near Memphis) with a stop at the West Tennessee Regional Art Center in Humboldt, Tennessee. Really lovely exhibit of Mildred Jarrett's work, which has since come down, but you can see her work at
http://www.mildredjarrett.com/index.htm

At Tunica, I played in a couple poker tournaments. The first night I got great cards & played pretty well & I'm not sure where I placed because I forgot to check when I got knocked out. The second night I got pretty good cards & played super & made it to 12th place out of 38. Not in the money or anything, but I wouldn't have played much differently. A bunch of strategic all-in bets that worked for me--until my last one when my trip kings got beat by a straight. Had to play it that way...

I am definitely going to plan a poker junket across the U.S. sometime. Cheap rooms. Free drinks. Reasonable food. Fun entertainment for not much investment. (Each tournament cost me $60, for hours of entertainment. Plus I already improved from night 1 to night 2, so imagine how good I'd be when I got across the country.)

One night at a mom & pop motel in Perryville, Missouri & one night at my friend Suzy's place, the Home Motel in Salem, South Dakota. We hit it off as great friends on my way out to Montana after Zach's wedding & I now have a regular room there. She is just fabulous.

& now all things Montana. Lots of pitch with my folks. A bit of casino with Mom. A nice turn-around-&-come-back road trip with my dad to do things like drive a 4 wheeler onto long teeth of a forklift, lift it to the level of the tailgate of a pickup, back it in, climb out & move the forklift away. My dad's 78, but you'd swear he was 40.

I'm having a Guinness here at Carter's. (Just had lunch, so I can afford one beer.) I had to get my emailing done, because a mother/daughter book club in Massachusetts is featuring Growing Wings for their January selection, so I came up with a list of discussion questions for them.

Blog alternative:
245. Surprise someone with a holiday card, especially if you don't usually do them. I used to do a very clever one, but haven't yet this, umm, millennium... So someone is about to be very surprised.

Posted by Laurel Winter at 1:56 PM