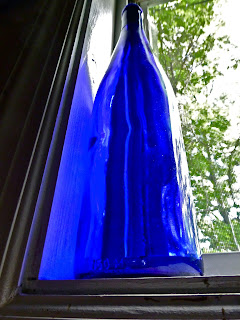 So much depends on the blue wheelbarrow 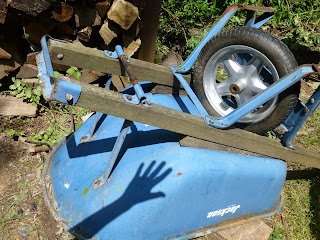 I should have put in a picture of my toenails. Why? Because Tuesday I had a spontaneous spa day. I already had a haircut scheduled & was planning to stop in at Tops to replace the shoes that I've literally blown out I've worn them so much. Then Satori (the young woman who lives downstairs) needed a ride to work -- it's walking distance, but she hadn't allowed quite enough time & would have had to run in her cute but impractical shoes. Instead of doing all of my several things by walking, I gave her a ride, did a few car-ish errands, reparked in my usual space & walked downtown.

Have you ever had a 3-minute shoe shopping expedition? I highly recommend it. I wore my blown out shoes into the store, showed one to the woman at the first counter. She directed me downstairs. I looked around for 2 seconds & decided to just flash the shoe as soon as the man in the pink shirt finished helping the woman next to me. "Alas," he said. "They don't make those any more -- but give me a minute." He came back with a single shoebox & I put on the Jambu Blossoms -- with stitching the perfect color for the dress I am wearing to Nick & Chloe's wedding (you may be familiar with it, as it is the same dress I wore to Zach & Tiffany's wedding) & danced out of the store in them. Not without paying a reasonable amount first.

Then, because the shoe shopping only took 3 minutes, I decided to see the Aveda salon where Satori works. So cool. She gave me a tour & I had a sudden urge to have a facial -- & then a sudden urge to add a pedicure. They were able to schedule me right after my haircut, which was on the next street. Even with a tour of L'eau de Vie, I got to Eclipse (my darling goddess stylist Casi!) early & they gave me a glass of wine while I was waiting.

New shoes, glass of wine, hair cut, pedicure, facial -- a girl can just swoon. Either that or walk home...

I would tell you to schedule a spontaneous spa day, but then it wouldn't be spontaneous, would it? So instead I will tell you to be open to the possibility of treating yourself as if you are the queen or king of your life. Soak your feet in a little tub of warm water & something that smells good -- even if you have to raid the spice cabinet. Oh, do a little olive oil & sugar rub. Mmmm.

I am in Somewhere, Kentucky, right now. Free wi-fi & a fridge & microwave. Now if only I had something to cook. I did the most brilliant job of packing my car ever. Snacks that stay in the car. Snacks that come into the hotel room. The suitcase, which stays in the car until I'm going to be somewhere for more than one night. (Which doesn't include Somewhere, Kentucky.) A canvas bag with a few clothes that do make it into the one night stopovers. You get the idea. I even put the ice in my cooler in little zipper bags & it was still mostly frozen so I just popped the bags into the little freezer compartment & will not have to refill them from the nearby ice machine.

I think I can fall asleep now, so I shall close, even though I have more to say. Another post...

Posted by Laurel Winter at 1:06 AM