Dear NASA, I regret to inform you...

It's official, NASA. I have decided not to become a pillownaut. Not because the idea of participating in a medical study isn't appealing. Not because I couldn't think of something to do with $18K or so, for a couple months of "work".  Not because I couldn't accomplish a whole lot while not quite flat (head slightly LOWER than the feet) on my back without distractions for 70 days. Least of all, NOT because I don't want to work with NASA.

Since I found out about it, which is when I was very very young, I've loved the idea of being an astronaut. This was before space camp, or, if it wasn't, before I'd heard of space camp. I'm pretty sure it was before space camp. Besides, astronauts at that time were fit (& male) fighter pilots. I turned to science fiction instead. Have Spacesuit, Will Travel was a huge favorite of mine.

The other day, though, I turned on my radio just as the announcer was laughing about the idea of putting partying aside for 70 days & helping NASA test the effects of zero gravity on their astronauts. My ears perked up. I looked into the study & the various articles, in Wired & such. A study! For NASA! One that I could do! (With the tiny little problem that they're looking for people who represent the astronaut candidate pool, which 54 year old women probably don't inhabit much. Except they have scientists, don't they. Some of them could be 54...)

No, the thing that kept me from filling out the survey was the fact that I'm in (possibly) the best shape I've ever been in, what with my standing desk & getting (pretty much) back to using my weights. That & the fact that the bone density isn't guaranteed to be replaced. Being a skinny white chick of certain age, bone density is not something I like to subtract. Besides that, in thinking about what I could accomplish while (more-or-less) flat on my back without distractions is not substantially less than I can accomplish on my own two feet, with distractions. I like distractions. I like long walks in the woods. I like shorter (but still long enough) daily walks to the post office, & possibly the library. I like grocery shopping. I like moving about on my own power. I like my increasingly fit & flexible & strong body. I like birds. I like rearranging my furniture. I like traveling. Pillownauts, well, they don't do any of those things. So, NASA, you'll have to do it without me. I know you're (probably not very) crestfallen. Maybe someone in your ideal astronaut candidate pool will read my blog & sign up. Perhaps I have helped you in that small way. I've written stories about space explorers & such. (Including the fact that the least confident left-handed person on the starship was chosen to be the "The Negotiator" which appeared in F&SF, & that orange & lime jello with mini meatballs turned out to be an important plot point in a first contact story I sold to Analog.) So, in a very real way, I've given birth to astronauts. & I can do it again & again.

On to the next distraction, a visit from my friend Elizabeth. Too rainy to play basketball today, which we did the last time she was here. (My sore neck -- not used to looking up at that angle -- is perhaps grateful for the weather. Perhaps I need to add some faux shots while looking up at the ceiling fixture to my standing desk routine.)

Blog alternative:
269. Think about a long time childhood goal -- being an astronaut or a paleontologist or a cowboy -- & come up with some small way you can pay homage to that dream. Perhaps by scheduling a riding lesson...

Waiting for the other "choo" to drop

When I sleep with my bedroom windows open, which is about 9 months of the year, I wake up to the shooshing sounds of traffic on Charlotte Street & the sound of birds. (Actually, the first sound is usually a beep beep beep back the little (or not so little) truck up & then two or three loud "you get out of there, dumpster trash" sounds. Who needs an alarm clock.) But the most lovely sound is birdsong.

Today must have been dumpster guy's day off. Maybe I slept through it. The first sound I heard was one of my favorite birds. I have no idea what it looks like, but the song goes choopitty choopitty choopitty choo. I could be spelling that wrong. Grin. Except sometimes there's no last syllable, just a series of choopitty choopitty choopitty,  2 or 3 or 4 in a row, until -- wait for it -- there it is: choo. It's so fun. What makes it decide? To choo or not to choo, that is the question.

Anyway, I like it, even if I don't understand. Dramatic tension. Mixing it up.

May your morning bring birdsong.

Blog alternative:
268. Mix up some habit. If you always do something a certain way, stop short of completion -- before the choo -- & decide if there's another way to do it.

Posted by Laurel Winter at 8:53 PM 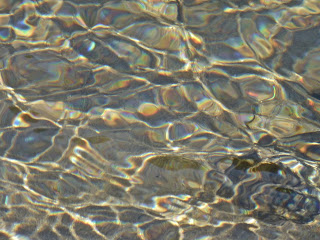 I find myself wanting to write--just because it's Friday the 13th, which is my lucky day. & it has been. First thing when I got up this morning, I was standing in the doorway to the deck & a bird took off & flew right at me--took a U-turn a foot from me. I'd been thinking about birds & how nice it would be to sit outside looking at them. Didn't expect it to be so up-close & personal.

So I sat down in my ergo-Adirondack (very comfortable) & what appeared but a young squirrel climbing around on the deck. When it saw me, it froze & darted. For a little while I thought it had gone in through the open door into the house, but if it did, it has been very quiet. Hence, I think it did not go in to the house, but raced down a deck post without me seeing it.

I've never had a squirrel on the deck before--this deck anyway. My sons used to, at the house they grew up in, when they saw a squirrel, race out the front door & each take a different direction, racing onto the deck yelling to scare the whatevers out of the poor squirrel, who would then make a semi-suicide maneuver to escape. They always escaped. I did not attempt to startle this squirrel in any way, but startle it did. That's the way of squirrels. Still, it was fun seeing it on the deck.

I also found out that my friend Terry Garey won a Rhysling Award for best short poem! Yay, hurray.

Various & sundry other good things, as you might expect, knowing it was Friday the 13th.

& now it is late & I am going to bid adieu to you in this first blog post of the fall. (September is officially fall.) Oh, except to say that I have hired a social media goddess, the esteemed Cathy Tenzo, who will set up a public Facebook page for me & that sort of thing.

Blog alternative:
267. Sit outside in the morning & greet the wildlife. Unless it's a mosquito. If it's a mosquito, you can beat a retreat, or beat the mosquito...
Posted by Laurel Winter at 8:01 PM