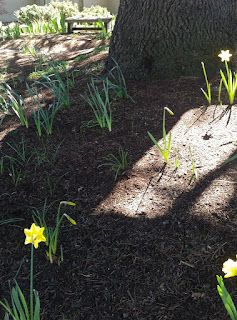 Oddly enough, I have existed since November, since last posting, since being in Minnesota with friends, since being in Montana with relatives (who are also friends), since moving to Oregon.

I just didn't tell you about it.

But here I am, in the Rogue Valley, right where I've been headed since I started Goldilocks-ing for weather. This indeed is Baby Bear's weather/topography/location map. In the mountains. Near the ocean. Not too hot. Not too cold. Not too humid. (Okay, it can get a little hot, but it doesn't get that way until 1 & it starts cooling down by 6 or 7.) Close-ish to new grandson. (Not so new anymore, as he's approaching a year old!)

My folks & I made a trip to Oregon, in the rain, with 2 vehicles loaded with my stuff, complete with cartop carriers. We stayed with good friend June in Coeur d'Alene & then with good cousins Kay & Barb & Ron in Portland, & visited good second cousins Donna & Tom, & good second cousin's second cousins Don & Vicky. Don had recommended a storage place, so I called them on the way down--in the rain--& said I'd like to rent a unit. The woman paused & said they'd had a waiting list for 3 years, but they'd just had an auction on Friday, & so far the waiting listers had all found other storage, so no problem. It was still raining when we pulled up & I did the necessary paper work, but we pulled up to the unit & it stopped. Unloaded both vehicles, got back in the car, started raining again. Coincidence? I think not.

Went back to Montana for 1 more load & some more visiting & to finish getting utterly swacked by Dad in pitch. (He'd won at least 70 more games than Mom & I. Without cheating. Grin.) Got to see Nick & Chloe & Max, & the other new baby in the family, Crystal & Tyler's Paige Marie, over New Year's.

Then I was off again, with the last carload. Hit the friends (lots of pinochle & a new puppy) & cousins (omg, fostering lots of puppies) on the way there. Went back to the same hotel we'd stayed in the first trip, since I'd left a notebook there. Plus it was a good hotel. (Days Inn, Medford, if anyone's looking for a place to stay.) I had a housesitting gig almost lined up but it fell through at the last minute.

This was on a Monday. I got a little wonky, thinking that I didn't have those 2 weeks I was gonna have to find a place to live. So I did some work centering & grounding & reminding myself that things always work out for me. Then I hit Craig's List & texted a single possibility, a young couple who were renting a room in their townhome. After getting a few details from me, the woman said she thought I might be happier renting from her boyfriend's mother. So I checked that out on Tuesday & it was perfect: a room in a house with two really great sisters (I'm between them in age) & 2 cats. (We're all older than the cats, but perhaps not in cat years.) I had to stop by the front desk on my back from the house & told the woman I'd found a place to live. She asked what I was going to do there (job-wise) & I said I had no idea. So she asked if I'd ever thought about front desk work. They needed someone at their other property. Talked to her husband when I checked out on Wednesday. Voila!

I am now a 3-to-11 front desk clerk! It's been lots of fun already. A bit of a learning curve on some things, but, hey, I just listened to an audiobook on brain plasticity (The Brain That Changes Itself by Norman Doig) that recommends new jobs, new languages, new instruments, etcetera, as ways to keep the brain sharp as one is getting older. &--at least the lucky ones among us--aren't we all.

Blog alternative:
304. Believe in magic. Just for a few minutes. See what happens.