Buckminster Fuller vs. the Dragonfly

After the Buckminster Fuller conference (actual title: ReViewing 4:Looking Forward at Buckminster Fuller's Legacy) at UNCA, I arranged a rendezvous, walked the maze, drove home, made Hamburger Helper, watched some Texas Hold'em (Poker Superstars Invitational, disc 1) & now am writing this to you.

I am willing to bet I am the only one from Buckyville who consumed Ultimate Cheeseburger Macaroni following the seminars on tensegrity & synergy & such. But it worked for me...

I have my eye on a camera, a Lumix. I'm going to decide by the end of next week or so, because I have an extra $5 (yay!) coupon from Best Buy. (Wow, does this post feel like product placement central. Don't you wonder who is paying me? Could it be Best Buy? Hamburger Helper? But no, it is the ghost of Buckminster Fuller. He is paying me in jitterbug polyhedrons, in translational rotational transformation.) 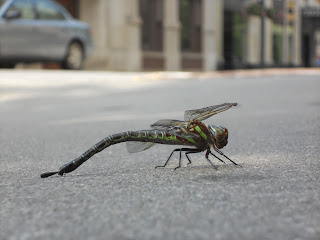 Or perhaps I am sponsored by this dragonfly...

Blog alternative:
238. Pick a sponsor, corporate or otherwise. You can even make it a reverse sponsorship, where you sponsor a business or a tree or send a positive psychic message to someone else's baby. (How do you sponsor a tree? Give it a glass of water or tie a ribbon around a branch or the ever-popular hug.)
Posted by Laurel Winter at 12:52 PM 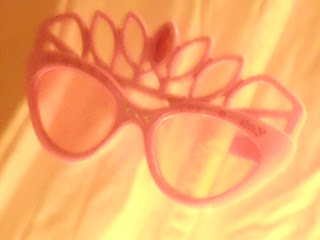 Yesterday was the Tangerine Ball, a benefit for the Arts Council, which provides funding for art in the schools. I wore a dress that has splashes of tangerine & fuschia, with a couple scarves & a peach sari liner that Susan Paul bought me in India. Then, the piece de resistance, my Cracker Barrel tiara glasses that proclaim "Queen for a Day." You may recall that these very glasses inspired my alter ego, Queen Faraday. I even read a biography of Michael Faraday, who instantly became my new hero.

Last night, at Aloft, a new hotel downtown that used to have a fabulous martini (what were you thinking, Aloft, to take the muddled cucumber & sour apple martini off your menu?) a young woman (possibly named Melanie? Melody?) asked to buy them off my face. She was willing to give me $20 but I told her $10 was sufficient.

How could I sell those pivotal glasses, you ask? I am Queen Faraday. I need no glasses to prove it.

We were at Aloft--even though we already knew they had abandoned the beloved martini--because the Tangerine Ball had no seating. Zip. (Unless you were wearing glitter & lingerie & doing burlesque poses.) Derrick helped build the set--a very fine set--so he had a free ticket. Mine was essentially free, because--along with $10 from the new princess--I found $40 in the little seafoam green purse I chose to carry my accoutrements in. Woo hoo!

Anyway, a fun time was had. Princess glasses were sent on their new quest.

Blog alternative:
238. Give away some meaningful possession. Know that you still possess the meaning.
Posted by Laurel Winter at 7:23 AM