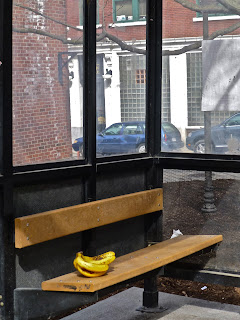 The bananas didn't know the bus routes, didn't know the schedule, didn't have a destination in mind. (Have you ever tried to read the mind of a banana? Talk about a split personality -- & that's just one banana. This was a bunch.) They were just waiting, wanting to be somewhere other than here, trusting that any direction was better than no direction. They weren't new green bananas, fresh off the boat. They were seasoned, mature, ripe bananas. Maybe just a bit past their prime, a few age spots, but still firm, nicely sweetened by their time on the planet. They weren't black. They weren't ready for banana bread, that one-peel-in-the-grave last resort. They were ready to get out & see the world while they were still vital.

There is a happy ending to this story. The next five people to come to this bus stop each took one banana & a different route. The bananas saw the world, or at least the city, before their biological clocks took them to their final rendezvous at the landfill.

Susan Ariel Rainbow Kennedy, also known as SARK, is a fountain of inspiration. One of my favorite things from her website is Jupiter, her black cat, who has a kind of "magic 8 ball" function. You think of a question (mine is always "now what, my darling?") & click on the drawing or photograph (there are many different Jupiters) & get some advice. Frequently it's very cat-centric, like "take a long nap" or "blink slowly" but I just got -- 2 days in a row -- some very good & appropriate advice:

These were particularly apropos for me, because I had submitted some photos & an article via my photography group to a magazine called The Laurel of Asheville. Wouldn't it be cool, I thought, to have photos & writing in a magazine that was practically named after me?

The editorial response was:
"Say, those five photos are nearly identical. I realize that was the gist of her story. Still, from a layout standpoint, there's not enough variety. Also, four of the five were not in sharp focus."

I began a little flurry of trying to find other photos from that particular shoot that would fit in with the sharply-focused one (once I'd figured out which one that was) & after determining that the others weren't really good enough either, took a deep breath & relaxed & decided to continue to work on my photo skills & try again at some future date.

It reminded me of when I started painting & had some nice paintings & some kinda sorta pretty good paintings & took them all down to a coffee shop in Winona for a solo show. I stepped out before I was ready. I'm not sorry I did it, but there is something to be said for allowing the learning & the exploration to be just that & achieving a certain level of mastery before hiring an opening act & scheduling the world tour.

If you want to ask that wise cat some questions, here is the link.

Blog alternative:
254. Set yourself up for a great conversation. Say a kind word to an interesting-looking stranger or invite a good friend who may or may not live in your house to share a few words. Perhaps ask a question. Perhaps ask yourself a question & share the answer. Giggle out loud when you read something that delights you & let someone ask you what's so funny & read it to them & see where the conversation goes. (& remember, a great conversation doesn't have to be long to make it into the memory banks.)
Posted by Laurel Winter at 1:46 PM 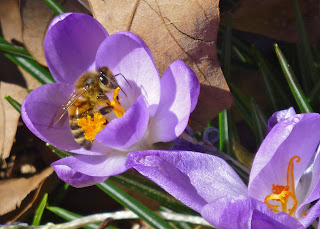 Morning paged me, & I answered

Once upon a time--

Today was the best day ever, since yesterday, until tomorrow.

Why?
Because today I was in today.
I took a walk
& watched some movies
& worked on my room
& ate tomato soup & grilled cheese sandwiches
& did some reading
& did some writing
& picked up free art supplies from the streets & sidewalks
& photographed a bunch of bananas waiting for a bus.
Today.
Today!

& in the morning, morning pages. Yes, that means exactly what you think it does. (If you're thinking what I'm thinking, which you may not be, until after this parenthetical.) Tomorrow (the new today) I am embarking on The Artist's Way, with Cathy & perhaps Elizabeth. Not with exactly, for I am doing it alone, & whether they do it or not, but perhaps they shall parallel play along with me. I did it once before & it changed my freakin' life.

On a different today, a couple todays ago, I sent off a picture book with a timeline of 13.7 billion years. Don't worry, it's not long. Only about 200 words. (If a word paints a hundred million years...)

Oh, & something I've been forgetting to share: a google alert pointed me to a wonderful book trailer for Growing Wings that someone named Vona created for Humanities7. It made me cry. Thanks, Vona.

Blog alternative:
252. Hold the day in your hand & pretend it is a free art supply you just picked up from the sidewalk. Cherish it for its own beauty. Add it to other ingredients & make them all more delicious & beautiful. Share if you'd like.

Posted by Laurel Winter at 8:44 PM