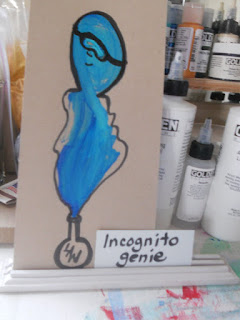 a little marker drawing
I did around a blob of paint...
Got the camera back. It's charging now, so I can check it out & show you some pictures, but I think I'll be going to bed before it's done charging & I wanted to blog again, so here I am, trumpet shadow less again. (You are going to be so disappointed after all this build up. Grin.)
In my continuing organization evolution, I have purchased a new product: The WonderFile portable workstation! As Seen On TV. Turns Any Space into an Organized Workspace! (I got the red one. Very cool looking. I shall report on its efficacy. I've actually made great progress with a much more low tech system, which involved organizing things into stacks & then -- instead of just stacking the stacks -- placing each stack into a catalog or magazine so it wouldn't re-mingle with its buddies. Segregation, in a word. & then some new stuff turned up that wasn't in any of the stacks & I just put it away in its proper places. Wow -- what a concept. I should do that more often. Grin.
It is an extremely beautiful week here. I've been walking a lot. Oops, gotta go, a crazed stink bug is flying around the room, bouncing off the mobile. If it stops somewhere I can reach it, I will catch it & give it a little ride in the palm of my hand out to the deck.
Blog alternative:
228. Pick up 3 somethings that are not in appropriate places. Put them where you think they should really go, whether that's the trash or a drawer or a recycling bin. (I even pounded a nail into the bathroom wall & hung a picture that I bought in Black Mountain the day I took the needle felting class.)
Posted by Laurel Winter at 7:29 PM

In case you tuned in specifically to catch a glimpse of my trumpet -- or its shadow -- I say to you "Flee with all haste." My camera is currently in the hands of the geek squad. Or, rather, enroute from wherever the geek squaddies were working on it to the local Best Buy store. Perhaps it is my camera, if it was fixable. Perhaps it is a new one, if it was not. I shall find out soon. Anyway, if you haven't fled yet, Hi! 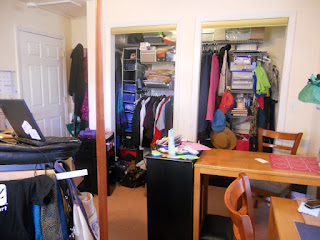 An oldish picture of my newish closet,
still in the process of being organized
I've been art-ing & finding marvelous free art supplies just lying on the ground. cedar boards, cut into thin strips, near a sawhorse at the side of a local pizza joint called The Mellow Mushroom. I asked if I could have them & the answer was yes. The very same day I was inspired to go into a yarn shop & saw 3 little scraps of yarn on a counter & when I asked if I could have them the guy gave me a purple plastic bag full of little yarn scraps.
This is my second fortuitous visit to a yarn shop. Derrick is taking a clay class in Black Mountain & I rode along with him & meandered the town a few weeks ago. Went into a yarn store & they had a class in needle felting coming up not 2 hours later. I checked in with Derrick & arranged for later transportation (since we'd come together in my car) & signed up for the class. Oh, joy. Needle felting sounds like squirrels nibbling on wood, or perhaps an attack of wild termites, as the uber-sharp barbed needles go through the combed wool & into the foam block & back up again & it's way fun. I have quite a knack for needle felting, it turns out. Later (with the old fixed camera or the new replaced camera) I shall show you.
I just took a Tumbleweed Tiny House work shop in Asheville. Very fun. I learned some things, one of which is that I already know quite a bit, which was fun to confirm. Met some great people. Got rid of someones's headache & helped someone else with some persistent shoulder pain -- she has less pain & more range of motion than she's had in years. Yay, energy!
I've also watched some fun dvds lately. We Are Marshall, about a college football team that crashed & died & the coach who helped rebuild it. (No, not a zombie movie.) If you watch it, check out the great coaches special feature. I think I watched it 3 times!
Blog alternative:
227. Imagine living in a house that's only 120 square feet. (Or 350, if 120 is too small a leap.) What would you for sure have to find space for & what could you begin to let go of?
Posted by Laurel Winter at 1:20 PM