Here there be dragon...

My furniture is a little odd & eclectic. Instead of a regular couch, I have a green damask (with roses) chaise lounge from Home Decorator's Collection that I assembled myself. My dining room table is a turquoise bistro table from Target, which isn't big enough (not to mention that if you spill something it drips right down onto your cool octagon rug) so I got a big circle of tempered glass to put on top. The bad thing about that is that one tends to run into the edge that doesn't have a chair parked by it.

A dragon, of course. It actually belongs to my son Nick, but he only has 99 (max) things not to mention my grandchildren Max & Clark, who could potentially be hard on a ceramic dragon that graced Nick's room in middle school & high school. So, I am guarding the dragon that is guarding the edge of the table. 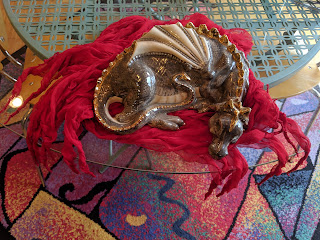 Blog alternative:
314. Adopt a dragon. Or bring some keepsake that used to belong to a child out into the light of day.

No prob taking the Senior discount...


On Tuesdays, I play 55+ cribbage at the Senior Center. One of my writer friends said he wouldn't go to a "Senior Center" because he doesn't want to be labeled a senior. I think he's a year older than I am. My theory: if being called a senior lets me save money at restaurants or at Goodwill or gets me in to play cribbage with a bunch of kick-ass players (One of my favorites is Earl, who is 93, unless he had a birthday I don't know about, & the sharpest tack on the bulletin board. Also cute. I told him if he wasn't too young for me, I'd go after him, & he said, "Back atcha.") then call me a senior. I know people who are younger than I am who don't have a youthful bone in their bodies. & I know that I adore this age that I am. I care so much less about what other people think about me, or about anything else. Why? Because we all get our own opinions. If I want to have mine, then I guess I'd better let everyone else have theirs.


Blog alternative:
313 . Do something youthful. Blow a straw wrapper at someone (you know) in a restaurant. Skip down a sidewalk. (I didn't learn to skip until I was 9...)

Here's a short post from my morning pages the other day after I realized I was just writing a description of the day before:

This doesn't need to be a diary of everything that has just happened in my life. How about a map (tentative, of course) of tomorrow, of next year? How about a map of my heart, a delineation of desire? I can feel my breath deepening, the expansion of my soul & my cells as I think these thoughts, write these thoughts. Yesterday? Done. Gone. Use the banked sparks from it to kindle today's fire. Use the memories to kindle new thoughts. Use the map you've walked to set you on the new new new path.

Blog alternative:
312.  Write a letter from an imagined future to you here & now.

Little Thing Thursday brings you another blog. I just spent a lovely long weekend in San Francisco, first hanging out with my son Nick & my daughter-in-law Chloe & my two grandsons, Max (3 & 1/2) & Clark (turned 1 at the end of July). Much fun was had. I helped decorate the Christmas tree, which is inside a baby corral to keep it away from toddler fingers. A very wise decision. I read lots of books with Max, including some from when my boys were little. I Spy Christmas was a huge hit with Max. He & I pored over the pages, looking for (some very hard to find) items. He had so much patience. Clark was only semi-convinced it was a good idea that Grammy was hanging around. I could only read to him when he was on Nick's lap beside me. We did have lots of fun at the playground, playing peekaboo in the play structures. I think it's really important to let kids guide the level of interaction. To an extent. When Max was being put down for a nap & didn't want a crying Clark outside his door, I picked Clark up & let him cry in the living room. Unhappy either place & that helped Max get settled...

Then I spent a couple lovely days with good friend Ellen Klages & her trusty cat Winston. Again, much fun was had. We took Madeline Robbins out for an early birthday dinner & played a bunch of poker & hot tubbed. I helped out with some errands & was rewarded by good food & great company.

Still, it's nice to get home, back to my routine. Easier to write & read. The well is fuller & we'll see what spills out of the bucket when I dip it in...

& tomorrow I'll set up my new bedframe, which came when I was away. 18 inches of storage underneath. Enough space for plastic bins of books & a medium-sized monster.

311. Look under a bed or in a closet. Make a little space for at least a tiny monster to have sanctuary.
Posted by Laurel Winter at 7:45 PM