Emperor of your own life

It is August twenty-oneth. Oops.

I mean, "Hi everybody--hope your August has been going well. Hope you're doing a good job being the emperor of your life." (More of a Vespasian or a Trajan than a Caligula.)

I'm writing an essay for Real Simple magazine's fifth annual Life Lessons Essay Contest. Having a great deal of fun, although the theme is "If you could change one decision that you made in the past, what would it be?" I'm not a big regretter, but I have come up with a cool spin on the topic that gives me juice.

I'm heading for poker soon, so I won't make this a long post, but I did want to mention a lovely artist encounter with a woman named Brit J. Oie. We were speaking about the mountains in her art, something I appreciate, having grown up at Nye. She said they were inspired by the mountains in Norway, where she was born & raised. "Oh!" I said. "I'm five eighths Norwegian and there's a little town in Norway that has my family name." She looked it up on her iPad & found out that she grew up less than 2 hours away from Hjelvik, Norway. How cool is that?

I'm tired of not having pictures, even though my camera has broked & I haven't figured out how to get the photos that I have taken into my new computer, so here's an older one of this cool stand I bought at a place that was going out of business for about 6 months or so. The owner kept claiming that this was perhaps the last day. It's the same place I bought the trumpet...

Anyway, I was carrying the stand home & got tired of it, so I called Derrick up & found that he & his pickup were not far away. I parked the stand & hung the top sideways so I could look through it to the construction on the jail. 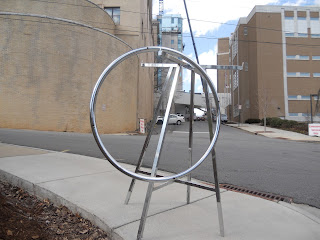 Blog alternative:
236. Think about a decision you made in your past that might not have been one you'd make today--or even would have made then, if you weren't drunk or hormonal or peer pressured or somesuch. Go to realsimple.com/lifelessonscontest & see if you want to write it up & give me some competition. The deadline is September 13th.

Posted by Laurel Winter at 2:19 PM