Brought to you, in large part, by Henry David Thoreau 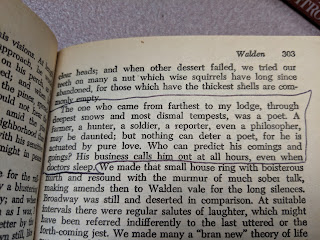 In going through my books, I unearthed the copy of Walden and Other Writings by Henry David Thoreau that I read & reread & underlined & circled while I was in high school. If I had to pick one book that made me who I am today, it could be this one. Fortunately, I don't have to pick one. I gulped down so many with my hungry eyes.

But Walden was special. I was going to be a poet & a hermit. I even had a place picked out, a cabin with green tarpaper on the walls, on the east side of the mountain. I was going to run a bucket down to the Stillwater River to haul up drinking water. Once my sisters & I swept about a billion dead flies off the floor.

The cabin no longer exists, being part of the tailings of the platinum & palladium mine. The house I grew up in was right where the main adit for the mine went in. Goodbye big front room. Goodbye patio. Goodbye Secret Garden. Goodbye Pete's house. Goodbye guest house outhouse & garage. The pink house still exists, in another location, but the others are only in our memories.

Blog alternative:
316. Think about the books (or movies or songs, if you're not so much of a book person) that created you, challenged you, blew the top of your head off. Reread if you dare. Some of them hold up & some of them, well, you had to be there, & you were, but you aren't any more...

Posted by Laurel Winter at 7:53 PM