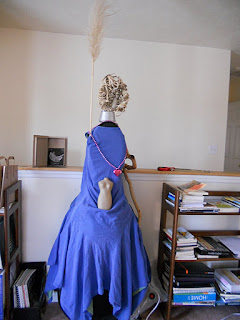 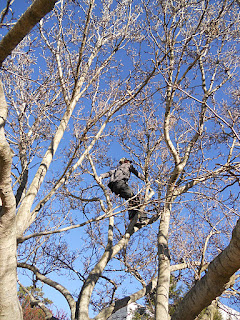 Nick in a tree at UNCA 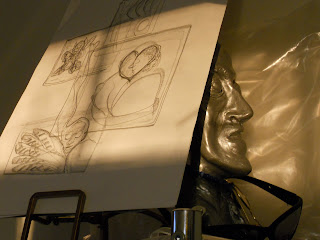 Howard has lost his sunglasses
Recently, I liberated Howard, my World Fantasy Award, from the box in which he has been "living." His rather bulbous eyes (H.P.Lovecraft as envisioned by Gahan Wilson) are quite sensitive after being ensconced in cardboard lo these many years. He hid on a shelf behind some artwork & tried out my sunglasses, but they seem to have fallen off. Poor Howard.
I have to admit that the main reason I am writing this is to blog 4 times in a month, which I haven't done for a while. Doing everything but blogging, I guess. Just today, I spiced up one window's covering, dressed my cello up as if she were a woman with a kudzu basked head & an aluminum armature neck, & played some poker at Buffalo Wild Wings against crazy persons who called themselves Pink, Blue & Max & would go all in on crazy low level hands. Consequently, I ended up with almost $30K virtual dollars. Also walked to the post office, visited with my friend Elizabeth, did the usual morning work with Derrick & continued the re-org of my art supplies & ideas.
Nick is back in Pittsburgh. We had a very rainy drive down to the Greenville airport & I hung out at a Wendy's for about half an hour after I dropped him off, to let the traffic subside a bit. We had a truly splendid time. He introduced Derrick & I to a cool 3-person card game called 99.
Blog alternative:
219. Dress up a window, even temporarily. A colored bottle, some tissue paper, a figurine.
Posted by Laurel Winter at 5:37 PM