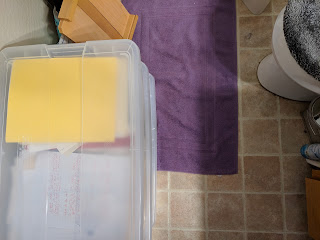 So I had this paper project going, after I'd ripped dozens of old notebooks (some from high school) to recycle the angsty bits & the to-do lists & save stories & poems & ideas. I was putting them in sheet protectors & binders. But then I was going to have the poetry group at my house & things needed to be made more presentable. I did it. I made it way too presentable. The paper project stalled. Big time.

I decided I needed to get down & dirty. I moved the detritus to a way less convenient location, so I would have incentive to get it cleaned up. So far, so good. I've recycled a whole bunch of paper & put some few pieces in sheet protectors. I even found an unsent letter to a friend from the spring of 1977. It's in an envelope & ready to hit the post office tomorrow. Yay me. The theory of having the task to be easy to get at & annoying if I didn't get at it has been working well.

Blog alternative:
325. Pick a stalled project. Move it so it's enough in the way that you are almost certain to act on it.

Posted by Laurel Winter at 6:35 PM