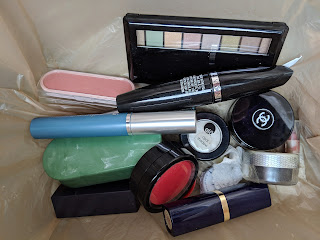 Cathy Tenzo, who is also in decluttering mode told me about an article from Miss Minimalist. I'll put the link at the bottom, for anyone who wants to take a look. The theory is basically that we have fantasy selves with baggage. Perhaps one of them is a crafter. Or a knitter. Or does drag. One of my fantasy selves has--had, as the photo from above shows the bottom of my garbage can--a bunch of makeup that I never wear. Not that I don't wear makeup. I do. Eyeliner. Specifically, Avon Glimmersticks. (But not the waterproof kind.) Pretty much always when you see me I will be Glimmersticked. Glimmerstuck? But mascara & blush & lipstick? Nope.

I thought about keeping some of it for a while, having a playdate with my glam imaginary self, but none of the makeup is very new (in fact some of it came from when Katie Stehn & I tried out for Rocky Horror Picture Show in Rochester, Minnesota, before I moved to Asheville, North Carolina, in 2006) (& some of it is older than that) so I just let it go.

I take that back: I have some assemblage ideas for the nifty little cases that some of it came in, so I scraped/washed the makeup out. But I have an expiration date. If I haven't used them to make cool things by June first, they're gone. I think the expiration date for art supplies may be a good idea & I intend to apply it to other things as well.

Blog alternative:
321. Think about some of your fantasy selves. Is one of them hogging shelves or drawers that you, who you really are right here & now, could be using to better effect? Throw or give away at least one thing...


Article about decluttering fantasy self
https://www.missminimalist.com/2011/08/declutter-your-fantasy-self/

Posted by Laurel Winter at 7:11 PM